Yesterday, we took a little drive to a place off the Blue Ridge Parkway called Smart View. It's only a few miles away, and we played some ball, the boys rode their bikes, and we hiked a little on the trails as well.

Elliot was born to climb trees. I'm pretty sure that almost every time I looked at him ,he was halfway up a tree- or trying. He's a natural. 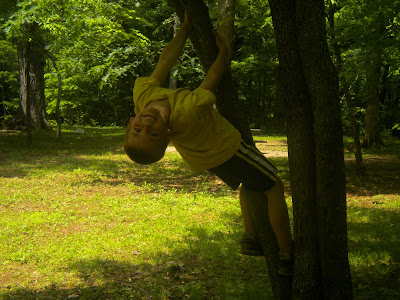 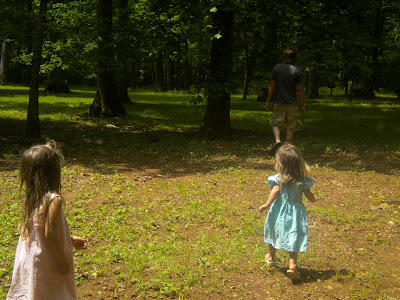 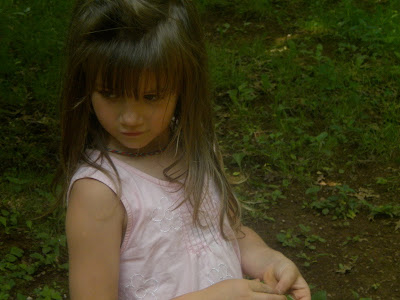 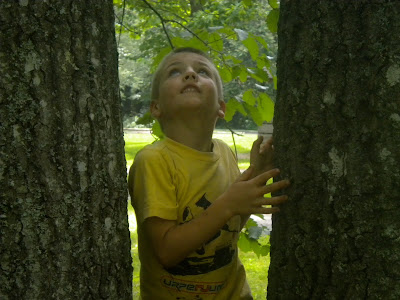 When you live in the mountains, it's pretty exciting to find open fields and meadows to be able to ride a bike around or kick a soccer ball. That's the interesting thing about where we live now. We are sort of on a plateau in the BR mountains, so we are a few thousand feet up in elevation, but there are some nice flat spots such as these. 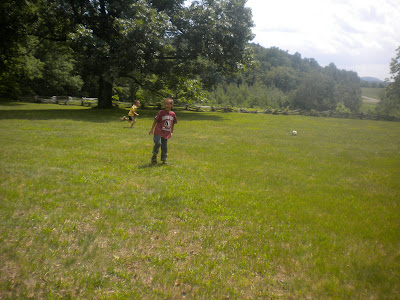 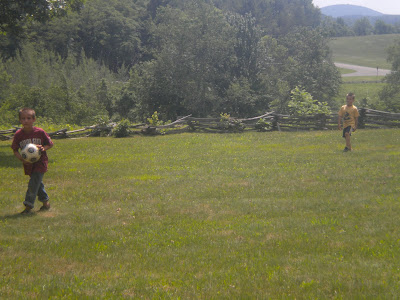 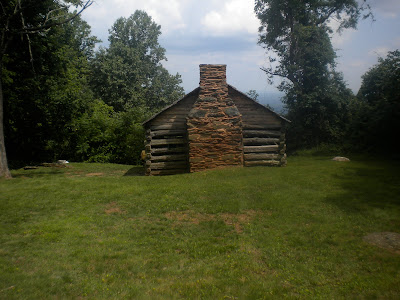 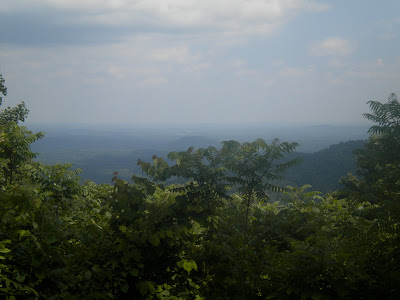 Blair's pointing out to Novah what he thinks is poison hemlock. (which killed Socrates, etc, etc...) 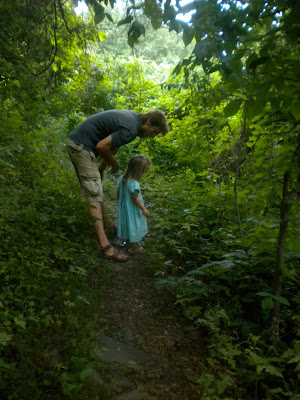 What? Poison?? What is it about a substance that causes death or injury that brings kids running? I'm thinking that the next time I call them to come get their clothes off the floor or to actually flush the toilet when they're through, I will just call, "Connor, Elliot....POISON!!!!" And they'll be there in a flash. 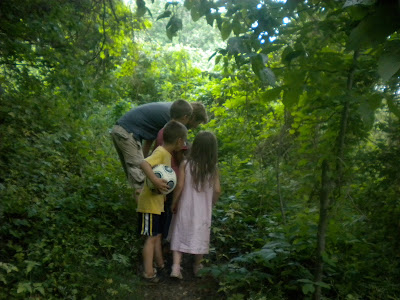 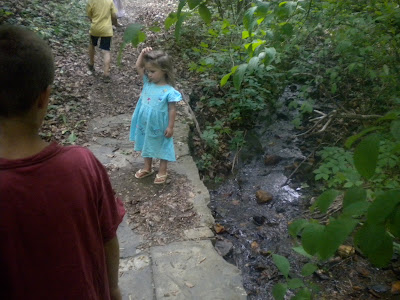 That's me with a really silly face. Rocking the Moby Wrap. I love that thing. So comfortable and easy. A little warm, yes, but I prefer it to a sling. 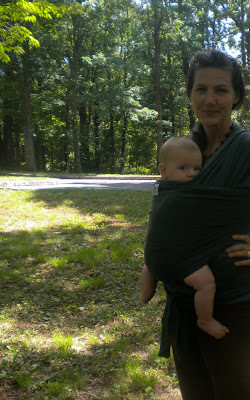 Why, shocking! Elliot in a tree? 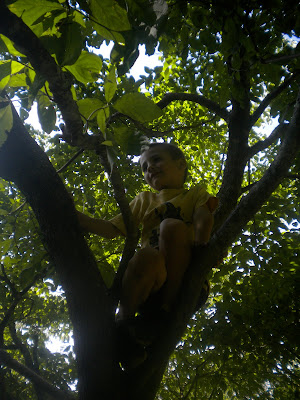 Elliot...a tree climber? I had no idea! 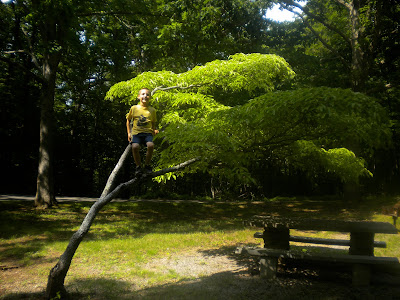 Yesterday, we got some sweet, raw honey from the farm. There are a few bee boxes out there, and the guy who keeps them stopped by the house and gave us a frame from the box. Yay!

It was definitely a messy job because we obviously don't have the appropriate tools for extracting it properly. We just scraped it all off into a big bowl, then strained out the pieces of honeycomb to separate from the honey. We got just about 2 pints of honey, and will still definitely use the comb as well. The kids have been sucking on pieces of them and then chewing it like gum. 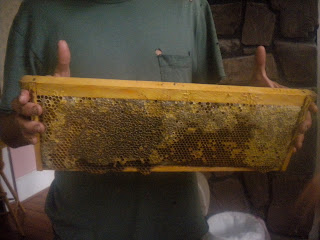 Ok, see? I warned you that I didn't have a super-awesome camera to take great pics of me doing step-by-step "good things". 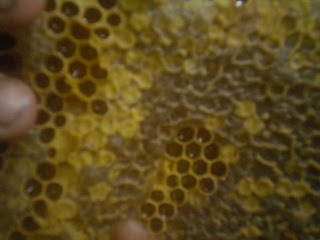 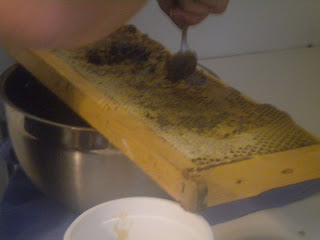 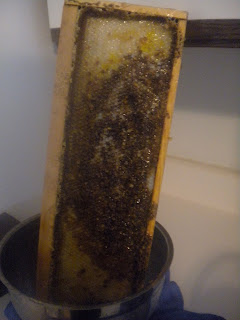 And speaking of getting stuff from the farm/fields, we have been harvesting and eating alot of wild greens these days. This time of the year, there's not a whole lot of cultivated produce available yet. All of that will be slamming in about a month, but unless someone's got spinach or salad greens in a greenhouse, it's slim picking. So, as I said, we have been harvesting and eating alot of nettles, lambsquarters, dandelion greens, etc... These greens have an astonishing- truly stunning amount of nutrients in them and they grow plentiful and wild. Like weeds, literally. :) These greens are especially high in Vitamin A and calcium. Okay, I know, I'm boring you to death. I don't even have super-cute little pics of the kids holding each of those greens for you visual learners. So sorry.

Aaaaanyway, the main idea being that we are trying to be resourceful and creative, AND what a great thing for the kids to learn- to identify and forage wild greens. I mean, someday, that may be all we've got! That's a whole other blog entirely.

And in an unconscious effort to prove what a bad blogger I am, I took the kids to Rakes Mill Pond today, right off the Blue Ridge Parkway and basically our back yard. A few hundred years ago, Mr. Rakes built a stone wall on his property and dammed up a pond. He had a grist mill, and offered that his customers fish in his pond while they waited their turn. :) So, the pond is still there, right on the Parkway, and it was alot of fun. There was a 15 foot waterfall on the other side of the dam, and we saw bullfrogs, tadpoles, fish, turtles, crawdads, etc... OH, and I'm a bad blogger because I forgot my camera. Yep. So do your best to visualize, friends.

But, in an effort to redeem myself, we later went for a walk at home on the farm, and I dutifully brought my camera then....

Notice Novah's hesitant face. This is just before she launched into 30+ minutes of screaming bloody murder about some thunder off in the distance. Sigh. And I have no explanation for the book. 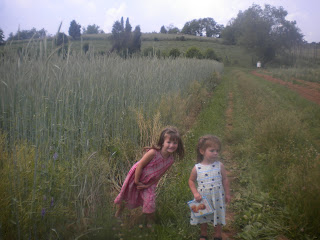 The bees, from which cometh the honey. Elliot went up too close and got stung by one. I had to pull the big stinger out of his ear. He cried a little. Then Connor informed him that when a bee stings, it releases a chemical that tells all the other bees to come and finish the job. So, then Elliot joined Novah in screaming bloody murder for 5 minutes or so. Our family walks are really awesome. :) 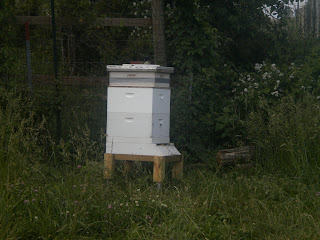 I lied! There's Connor with some lambsquarters! Good thing! 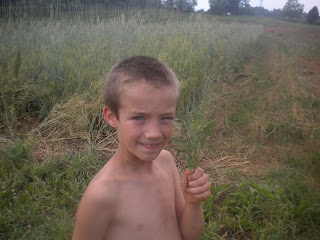 And these are the newly constructed hops trellises. The guys put in those 15 foot locust poles (well, 18ft really, but the hole they lie in is 3ft deep). Four rows of 10 logs. The hops plants are just starting to wind up from the bottom. They follow the motion of the sun and wind around on their own. The hops are grown for the brewery, which is located on the other half of the farm. Sweet! A good thing. 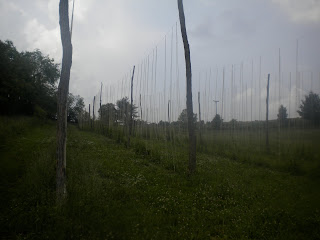 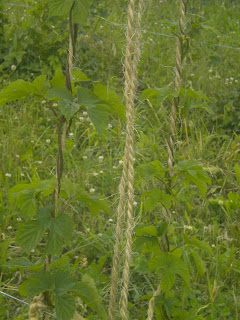 and here we have Connor pointing out every thing that's growing here and there. I should note that Elliot knows exactly what's there, and even planted some of it himself. BUT, those of you who know Connor know that he needs no excuse to talk. If he were out there in that field all by himself, you'd better believe he'd still be pointing and explaining, and somehow, asking a question. It's who he is. :) 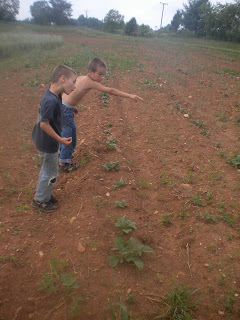 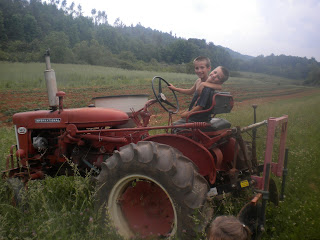 Elliot's smelling the air for rain, and yep, I'm pretty sure Connor's talking about something. Probably potatoes, but there's no telling. 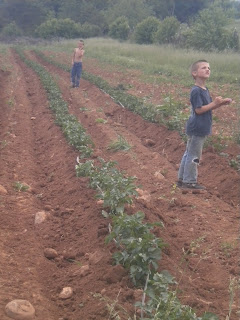 And, the boys on the big tractor. Connor's saying something about the emergency brake. Sigh. 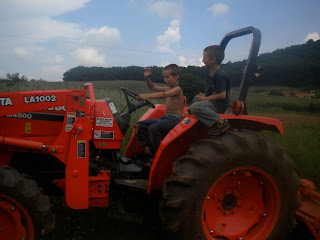 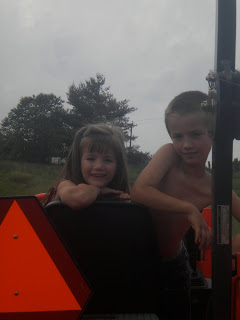 Sammy, our wildcat, always joins us on our walks. Just like a puppy. It's pretty cute. 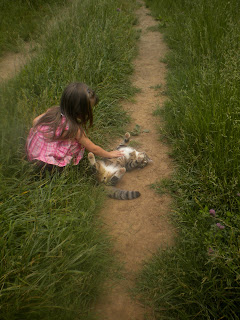 Okay, I know, I've bored you to tears. Somebody (kenya) has been putting the pressure on for post #2, and I know that my brother is beside himself in anticipation and expectation. I think he has lain awake for days, chewing his fingernails and checking this blog every 4 minutes just to see if I've updated it. It's OK. Sleep, Marty. Rest.

So, coming soon...my thoughts on the mail. And yes, I think I will do a Flashback Friday- starting next week, perhaps.
Posted by katiew at 1:35 PM 2 comments: 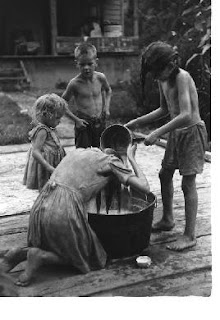 Oh my, where to begin? I haven't blogged before because I seriously question why anyone would be interested in what I have to write! Aside from the occasional feasting on rodent and stumbling upon baby wild animals in my yard, my life mainly consists of mopping floors and changing poops. I don't have an amazing camera that takes beautiful pictures. My kids almost always have dirty faces and hands. Their clothes are usually inside out or backwards.

In my friends' blogs, their kids are either portrait-ready, or naked and dirty, yet still somehow looking ethereal and fairy-like. When my kids are naked and dirty, they just look like dirty, naked kids. Like Appalachian, New-Deal era, naked, dirty kids. Like you just want to write a check and send a missionary. I mean, they're happy. They love their life! I'm just saying that my iPhoto tells a different story.

But, alas, I will humble myself...or is it the opposite...be more bold? Anyhow, I'm a blogger now.

My other hold-up was that I fear I will inevitably offend someone, sometime, somehow. It just seems to happen when I write. In person, I believe I am supremely non-confrontational. I hate to argue or to ever see people uncomfortable in any way. I think I usually defer to others as much as possible in an effort to put them at ease. But, when I write....sigh...what happens? I suppose I become more bold (perhaps we all do) and I find myself feeling very free. If I feel passionate about something, I take it all the way. I just love to write. I mean really love to write. I love words. I love synonyms and adjectives. I love expressing myself descriptively, and, um, I may have a tendency to exaggerate. Occasionally. To get a point across. Blame it on my Dashboard Thesaurus. :) Soooo, sometimes when my words carry me away, I find I've crossed a line somewhere.

I suppose you can consider this my disclaimer. I never want to offend anyone, or to impose my beliefs or my lifestyle on anyone. Ever. I'm sure I overthink things, too. I have a deep-seated fear of being misunderstood, and I probably care a wee bit too much about what others think of me. So, off we go. Therapy session over. Disclaimers done.

Life is hard and my days are long, but every now and then I stumble upon a really good thing. Or a good thought. And good things need to be shared with people you love. So, here's to good things. (And probably a few poops and rants and odd and ends in there sometimes as well.) Cheers!

By the way...those aren't my kids in the picture-but you had to stare for a minute, right?

katiew
I am married to Blair (since 12/01) and we have five children, ages 8, 7, 5, 3, and 1. I homeschool my kids and am fortunate to spend my days with them. We live on a farm (Five Penny Farm). We are trying to live as self-sustainably as possible. We take small steps all the time. We live simply, and are grateful for all we've been blessed with.